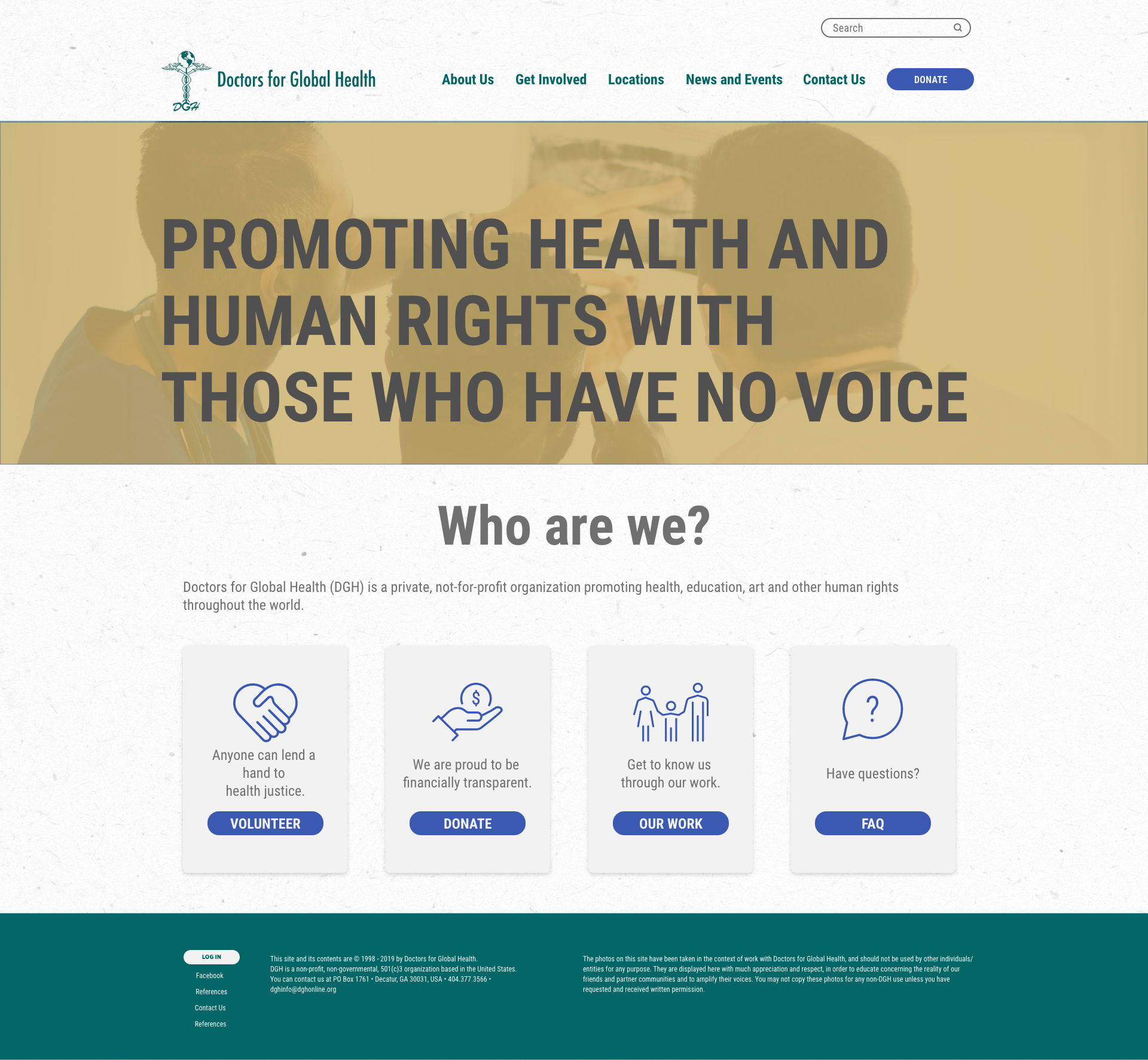 Doctors for Global Health (DGH) is a private, not-for-profit organization promoting health, education, art and other human rights throughout the world.

DGH's mission is "to improve health and foster other human rights with those most in need by accompanying communities, while educating and inspiring others to action."

DGH’s website was designed to provide information and opportunities to potential DGH volunteers and to serve as a means for donors to make financial contributions. We observed that information would-be volunteers are seeking, such as testimonials and confirmation of application submission, is difficult to find or does not exist, resulting in fewer would-be volunteers and minimizing DGH’s impact. How might we redesign the DGH website so to increase volunteer membership and donations?

In this project, I was primarily responsible for deliverables such as wireframes and desktop prototypes. I also facilitated card sorting, A/B testing, usability testing, and developed research plans.

To empathize with users of  the Doctors for Global Health Website, we relied on 31 user surveys and 3 user interviews. This allowed us to gain deeper understanding through a combination of both qualitative and quantitative information. Three themes were revealed in testing:

“When I was traveling, I wanted to have a good contact person for when I was in a remote part of the world because people don’t really speak English.”
‍
“I trust the opinion of those who’ve worked with them before.”

“I find that nonprofit websites can be kind of overwhelming”
‍
“I was unsure if anyone would get back to me.”

“I look for non-profits that actually engage with the community outside their office, and I want to see their members engaged with what the organization is doing.”
‍
“I wanted somewhere to get really good clinical experience. You’re not doing it for money, you’re doing the work for great experience and value down the road.”
‍
“The main thing for me when choosing a non-profit to support is where the money is going. Before I donate I will check how they use their money on Charity Navigator.”

From data gathered through surveys and interviews, we created an affinity map to categorize similar responses, needs, wants and lifestyles across our potential users. 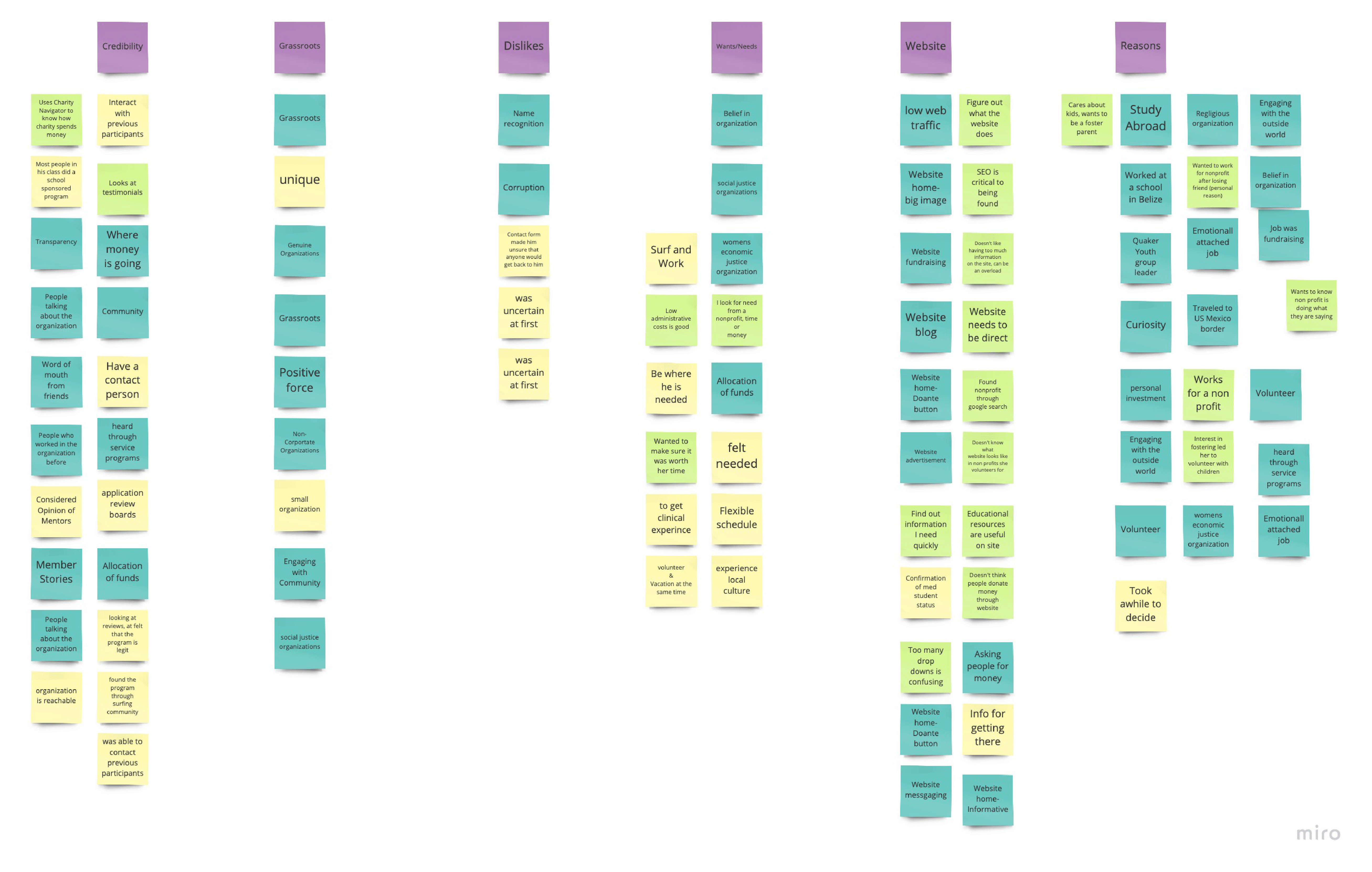 The insights we gathered were further distilled into a user persona. Meet Ray - Ray is an approximation of our typical user. Having a user persona helped us put a name and a face with our user, allowing us to empathize with our users. Developing a persona gave our user a seat at the table when it comes to making design decisions. 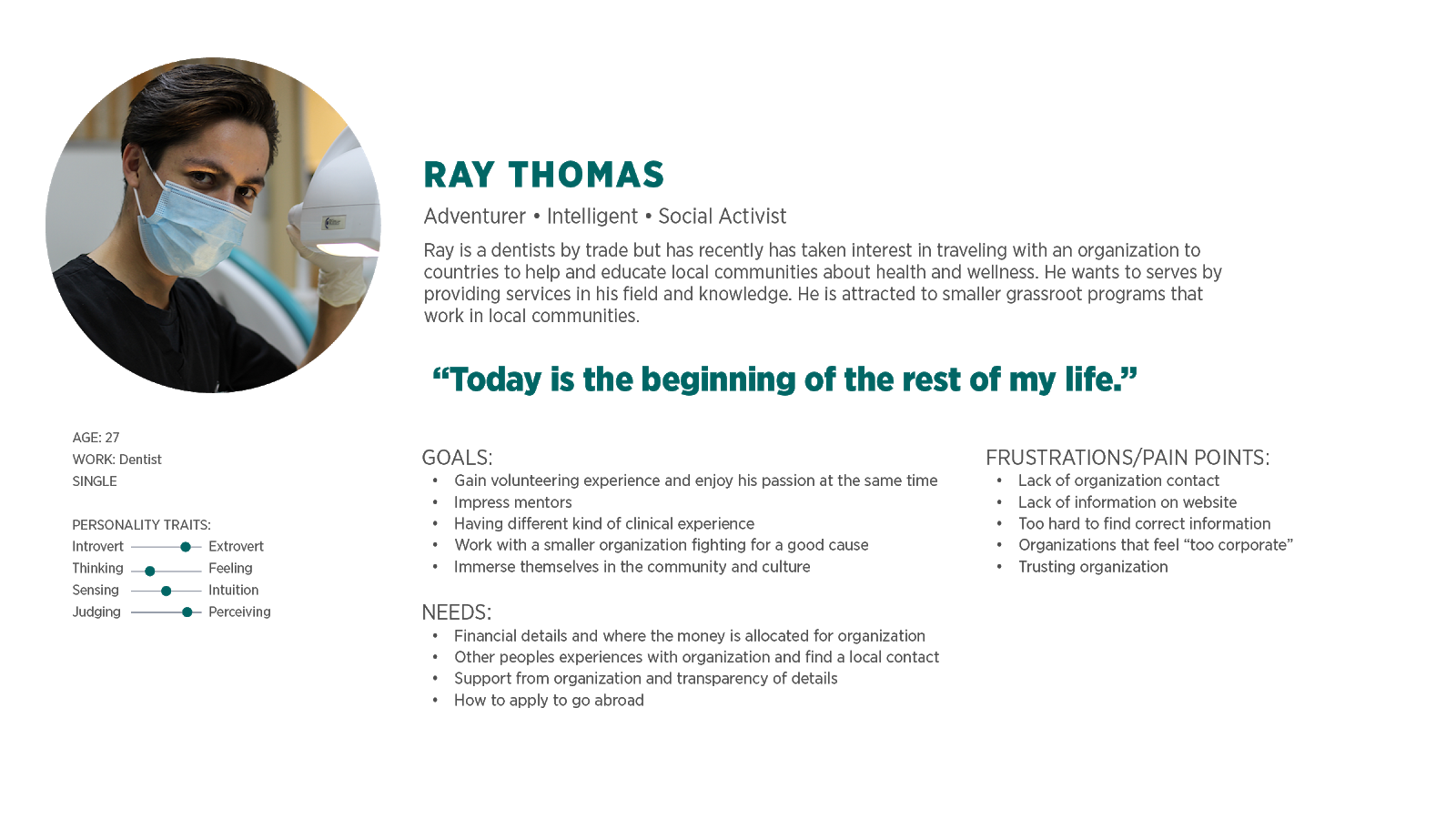 We continued by defining our problem statement (see above) and proceeded to brainstorm potential solutions using the “I like, I wish, What if” method. We then organized those solutions into a feature prioritization matrix to determine which solutions would have the most impact within the scope of our project. 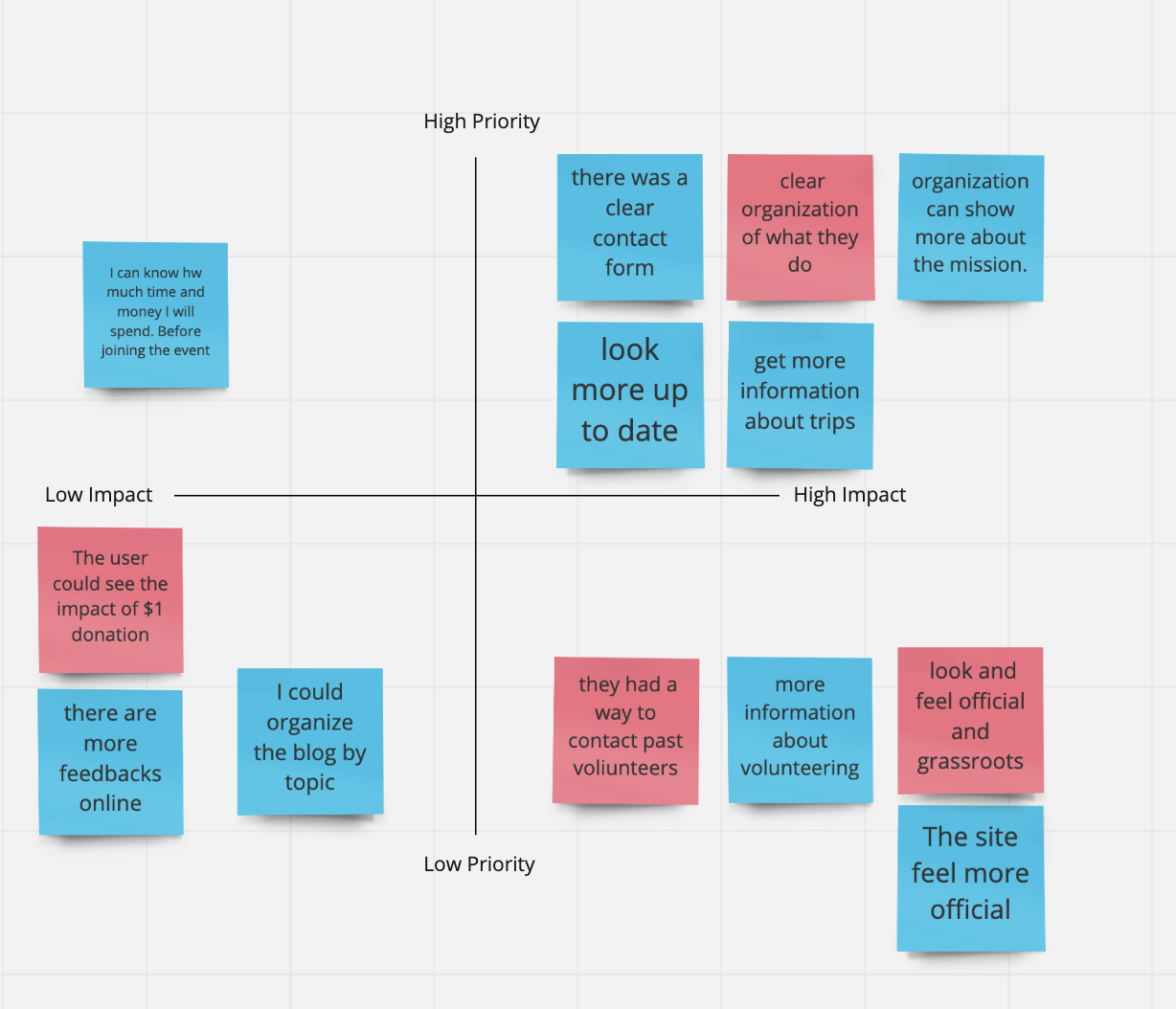 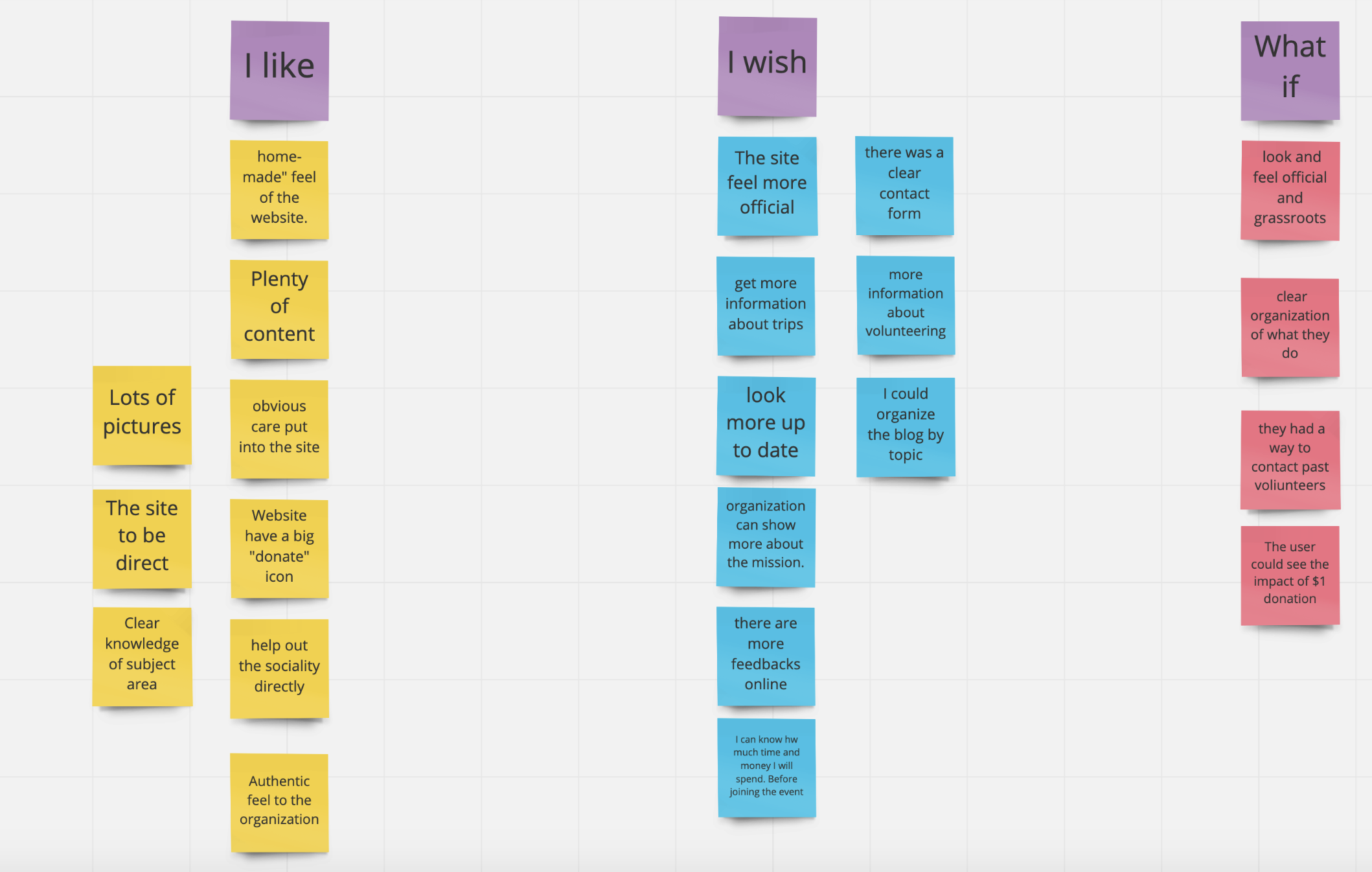 A story has five basic but important elements: the characters, the setting, the plot, the conflict, and the resolution. Our next task was to put these elements together to tell Ray’s story. 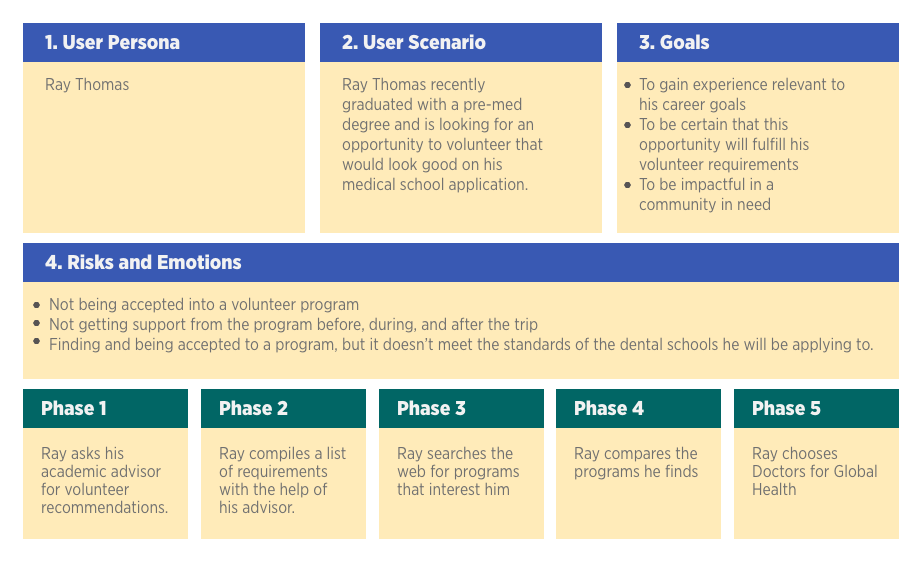 The next step was to translate Ray's story into a user flow. This allowed us to navigate the scenario as Ray might when he goes to the DGH website. 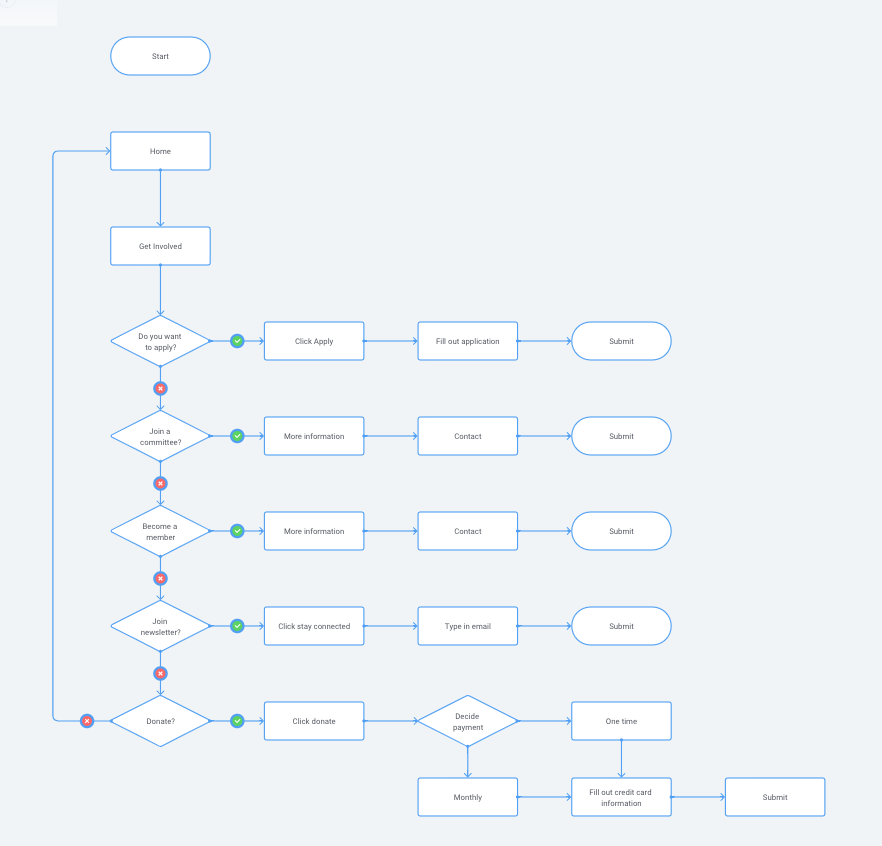 We used Ray’s story in conjunction with insights gained from card-sorting exercises to develop wireframes.

We tested these wireframes with four participants and observed the following:

Users went to get involved to find “volunteer” and “donate” - This result corroborated findings from the previous card sort.

Though we had already condensed the amount of copy considerably, users still found the volunteer page too wordy. We resolved to reduce all text on the site to no more than 40 characters per line.

One user mentioned that she would like to receive a receipt after making a donation for tax purposes. We felt that this was important enough to include in the next iteration.

Changes based on findings from testing and greater detail were applied in a mid-fidelity prototype. We were rapidly approaching our deadline.

Our team conducted usability testing on the mid-fidelity prototype with four participants. We also A/B tested two different locations for the placement of the FAQ, revealing that it should be placed under “About Us” not “Get Involved”. We were also still accepting criticism from classmates and continuing to make changes based on those suggestions. These are the changes that we applied to the high fidelity prototype:

This project taught the value and importance of seeking out the right types of people to interview. Our interviewees were people who had participated in similar volunteer work in the past, and one of them even had experience managing the content for a non-profit website. The insights we gained during interviews gave us clear direction at a very early point in our process.
‍
There were several themes revealed in research that if I were to continue with this project I would like to explore further:

Thank you for your taking the time to read this case study.

Connecting volunteers to a global health cause.